This piece originally appeared on Her View From Home in July 2018.

The memories of my mother-in-law spilled to the forefront of my mind, just as the contents of his jacket pocket fell onto our dresser.

It was Proverbs 31, written on hotel stationary, in my neatest block print. Holding the small papers in my hand brought me right back to her graveside, on a hot summer morning, seven years ago.

“Her children arise and call her blessed.” (verse 28)

As my second daughter gave a mighty kick from the womb, visible to every mourner present that day, I couldn’t help but to allow my mind to wander. Were my values apparent in the way I was raising my children? What would they say about me at the end of my days?

Would it be fond memories of time spent together, pursuing passions? Would it be long talks, well into the night, about their deepest dreams and fears?

Or, more likely at the current moment, would it be the memory of the mediocre housekeeping, always lactating, carpool driving, part-time working shell of a person who brought them into this world? Who had gotten so tired and overwhelmed that she had to just sit and stare at the wall once the sun had set?

This was not the memory I wanted them to have, but this was the life I was leading. To move beyond the hustle and bustle of early childhood, I knew I needed to rely on the very best lessons learned from one of the very best women.

My husband is the youngest of three children, so by the time he brought me home the first summer after college, my future in-laws were seasoned experts. My memory of their charming house in New England contains two items: paper plates and take out dinners. 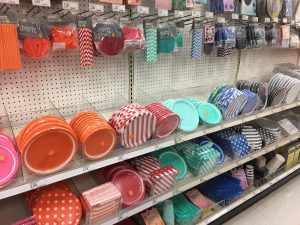 Having grown up in a land over 500 miles south, where paper plates appeared only at a church barbeque, and take out was reserved for a night when someone burned dinner, I was perplexed. My in-law’s kitchen was well equipped, the refrigerator was stocked, but meals in Connecticut were spent over the coffee table and Chinese food containers.

I spent years wondering why my mother-in-law adopted this habit, which became obvious to me only after her death. Or, at least, the why as it related to the life I was trying to cultivate for her grandchildren.

Over the years, paper plates and take out became my go-to when life just got to be too overwhelming. In this season of four little ones, who cannot be expected to chip in and help out but so much, we worked to honor Grandma’s memory by changing our routine. This year, as the summer approached, I let our girls pick out pretty plates from Target to have on those evenings when life got really busy.

All along the way, we spoke of the life of a woman that they would never know first hand. They would know their grandmother only by our own reflections. Through our stories, they would come to know a woman who left the best legacy, and taught me one of the most important lessons. The weight of carrying this legacy deserved more attention as my girls grew and began forming their own childhood memories.

When thinking back, I realized that the paper plates and take out taught something so much bigger than convenience. My mother in law knew the vital importance of respecting, accepting, and even treasuring the boundaries of each season of her life. And, outside of loving her son unconditionally, I think it was her greatest wish for me.

Unless it brings you joy, why spend hours over a meal when you are returning to the workforce after decades at home with your children? Why scrub dishes when you could be visiting with your son who has moved outside your home to follow his career passions? Why keep performing chores when you have just begun another round of chemotherapy and really need to sit at the end of the day?

“She is clothed with strength and dignity; she can laugh at the days to come.” (verse 25)

She knew what was important, and her life and service to her family showed us all the same. Was it the most environmentally friendly or economical? Probably not, but when reflecting on her life, this was not the focus of her legacy.

Instead, it’s memories of three generations around a coffee table, passing around a pizza box, and cheering as our nephew took his early steps. It is the recollection of picking table settings for our rehearsal dinner without the roar of the dishwasher in the distance. And, her legacy stands strongest in the memory of the moments she cuddled her infant granddaughter, without concern for what needed to happen in the kitchen. She knew her time was limited, and therefore, particularly precious.

Whatever has to happen to allow for these moments to be cemented for my daughters, I am on board. Even if it comes from a stack of Disney Princess plates and take out menus.

This site uses Akismet to reduce spam. Learn how your comment data is processed.